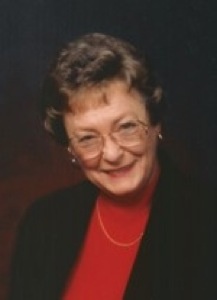 Jeannine Dean Johnson, 80, passed away peacefully at home with her family by her side on January 20, 2009. She was born September 5, 1928 in Marysvale, Ut. to Harry W. and Gladys L. Donnegan Dean. After her birth the family moved to Eureka, Ut. They resided there where she met and later married Frederick A. "Ted" Johnson on April 7, 1944 in Provo, Utah. They lived in Eureka while raising their family until 1979, then moved to Denver, Co. and later to Tucson Az. to follow employment. Jeannine was a homemaker all of her life and also was a real estate agent and co-owner of Tucson Business Brokers in Tucson, Az. She was a member of the Eureka Methodist Church, Ladies of the Elks and Tintic Chapter Order of Eastern Star. She was very competitive. She enjoyed bowling, playing bridge, fishing and picnicking. She also loved oil painting and won several blue ribbons for her art works. She especially loved being together with her family. Jeannine is survived by her loving husband, Ted, Payson, Ut, children, Janice (Gary) Boswell, Ted (Bobbie) Johnson, Eureka Ut, Lloyd Johnson, Rufus, Oregon, Paul (Laura) Johnson, Tucson, Az, 7 grandchildren, 10 great grandchildren and 2 great, great grandchildren; 4 sisters, Sedella Boren, Pl. Grove, Dalena Kaatz, Sheridan, Mt, Adelza Bardsley, Kearns,Ut, Lynnette (Lynn) Carter, Kaysville, Ut; brother, Ray (Penny) Dean, Grantsville, Ut; sister-in-law, Margaret Dean, Kearns, Jill Snell, Santaquin. She was preceded in death by her parents, 2 brothers, Elwood and Bill Dean, a daughter, Nancy Riley, a son, Roger Johnson, and a grandson, Gary Lynn Boswell. Funeral services will be held Monday, January 26th at 11:00 a.m. at the Tintic Elks Lodge, located on Main Street in Eureka, Ut. Friends may call at the Holladay-Brown Funeral Home, 66 South 300 East, Santaquin, Sunday from 6 to 8 p.m. and Monday at the Elks Lodge one hour prior to services. Burial services at Spanish Fork Cemetery, 420 South 400 East. The family would like to thank First Choice Home Health for all of the loving care that they have provided.

To order memorial trees or send flowers to the family in memory of Jeannine Johnson, please visit our flower store.