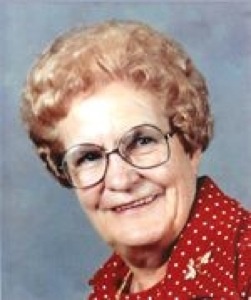 On May 13, 2006, Jennie Emila Isaacson Sanderson, wife, mother, grandmother, sister, and friend, peacefully passed away in the presence of her loving family. Jennie was born on November 4, 1920, to Sam and Elida Smith Isaacson. She married Albion Dewain Sanderson on June 27, 1941, in Provo, Utah, and was later sealed to him in the Manti Temple on March 4, 1994. Jennie and Dewain made their home in Genola, Utah, where they raised their six children. Jennie worked as a supervising technician at the Utah State Hospital for twenty-eight years and retired in 1985. She loved her family and enjoyed her pets, nature, reading, and living on a farm. Jennie was always a hard worker. She was a faithful member of The Church of Jesus Christ of Latter-day Saints. Jennie will be missed by her children: Samuel (Shirley), Rupert, Idaho; Neil (Barbara), Salem; Wayne (Katie), Santaquin; Jennie Lee (Devon) Clayson, Las Vegas, Nevada; Richard, Genola; Terry (Tam), Payson. She also leaves behind eighteen grandchildren, thirty-six great-grandchildren, three great-great-grandchildren, and her brother Seymour (Janice) Isaacson, Genola. She was preceded in death by her husband, and two grandchildren. The family would like to express appreciation to Lynn Robbins and the staff at Cambry House and to Alpine Hospice for the loving care they gave to Jennie. Funeral services will be held Tuesday, May 16, 2006, at 11:00 a.m. in the Genola LDS Church. A viewing will be held at the Holladay-Brown Funeral Home, 66 South 300 East, Santaquin, on Monday, May 15, 2006, from 6:00 to 8:00 p.m. and at the church one hour prior to the service. Interment will be at the Goshen Cemetery.

To order memorial trees or send flowers to the family in memory of Jennie Sanderson, please visit our flower store.