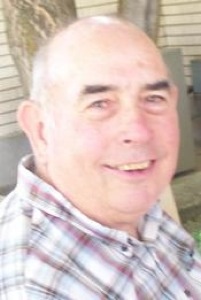 Our beloved husband and father Alden James "Jim" Peterson completed his life of faithful service and returned to his Heavenly Father on Dec. 7, 2011. Jim was a member of the Church of Jesus Christ of Latter-day Saints and had a strong testimony of Jesus Christ . He loved his family greatly and enjoyed any chance they had to spend time together.

Jim was born on Apr. 14, 1941 to Alden Lewis Peterson & Ella Irean Burraston Peterson in Payson, UT. He attended schools in Santaquin and Payson.

Jim and Neva were married on Jan. 6, 1969 and were later sealed in the Provo, UT LDS Temple on June 14, 1985. They have spent forty-three happy years together and loved each other dearly. They have five children.

He worked hard all of his life, including as a miner and also for over 38 years at Geneva Steel.

Jim loved his country and served in the National Guard. He was a member of the American Legion Post 84 and served as Vice-Commander and Commander. One of his proudest accomplishments was the role he and Neva played in the fund raising and completion of the Veterans Memorial Monument in Santaquin. He proudly displayed the US flag in his yard daily.

He also spent time in service as a member of the Santaquin City Council and as a volunteer firefighter and Fire Chief.

He loved his opportunities in the Church and served as a faithful home teacher, a member of the 5th Ward Bishopric, Ward Clerk, High Priest Group Leader, Stake Historian, and in the Sunday School. Jim and Neva spent several years serving together as Temple workers at the Provo LDS Temple. He loved his service and association with so many people there.

Jim was an avid outdoors man who loved hunting, fishing and raised animals of all kinds, but his horses were his favorite. He looked for any occasion to go boating or on a motorcycle ride. Jim enjoyed spending time working in his yard and growing a beautiful garden which he would share.

Jim was preceded in death by his parents, his sisters Carole Peterson and Bonnie Jean Baird., and sister and brother-in-law Robert and Joyce Snow.

The family wishes to express love and gratitude to Dr. William T. Alward and his staff for their dedicated care for many years.

To order memorial trees or send flowers to the family in memory of Jim Peterson, please visit our flower store.