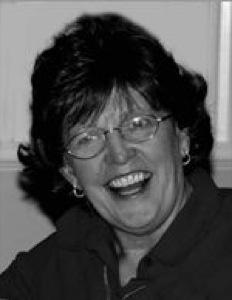 JoAnn Christensen Henstra, Wife, Mother, Grandmother and Loving Friend returned peacefully to her Heavenly Father on April 29, 2008. JoAnn was born on February 28, 1948 to Knola Weight and Heber Fielding Christensen in Salt Lake City. She was the youngest of 3 children. She met Robert J. Henstra Jr. while working in a dentist office. He needed his wisdom teeth out and she was just the girl to assist. They were sealed in the Salt Lake Temple 27 days later, on January 15, 1969. She continued to work for Dr. Goff until after her second child was born then stayed home to raise her 7 children. She was diagnosed with Ovarian Cancer in 2003 and fought a courageous battle until the end. JoAnn was famous for her super positive attitude and her unconditional love for everyone. Mom was known to count her blessings even until the day that she died. JoAnn is survived by her husband and children, Kristee (John) Killpack, Sam (Amy) Henstra, James (Shantel) Henstra, John (Ivory) Henstra, Debbie (Ken) Lawrence, Adam (Tiffany) Henstra, and Erynn Henstra, by her mother Knola, sister Ferol Hebden and 13 grandchildren. JoAnn was preceded in death by a son Peter, father Heber, and brother Daryl. Our family would like to extend a heartfelt thanks to the many family, friends, and neighbors who were willing to stand by and support mom. Also a special thanks to Natalie, her favorite nurse and the angels who cared for her at Dr. Tudor's and Dr. Rose's offices. A viewing will be held Friday, May 2nd from 6:00 pm to 8:00 pm at the Holladay-Brown Funeral Home located at 66 South 300 East in Santaquin, and on Saturday, May 3rd at the Genola Church, from 9:30 am to 11:30 am ending a half an hour before the funeral service. Funeral services will be held on May 3rd, at 12:00 pm at the Genola Church, located on the corner of Center and Main. Thanks to the efforts of the Genola Town Council, interment will be in the Genola Cemetery.

To order memorial trees or send flowers to the family in memory of JoAnn Henstra, please visit our flower store.