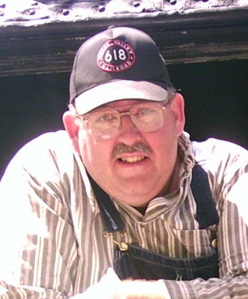 Joel David Thompson passed away March 4, 2019 in Orem, Utah.  Joel was born in Royal Oak Michigan on April 11, 1960 to David Harold Thompson and Lynette Bloom Thompson.  They lived in Royal Oak about 7 years before moving to Rochester, Michigan.  Joel had many fond memories of his youth growing up in Michigan.

Joel moved to Utah as a young man to attend Brigham Young University.  He worked as a printer his entire working life and enjoyed model railroading, railroad history and working as a Fireman and Railroad Engineer at Heber Valley Railroad.  Joel was an expert in antique Lionel and American Flyer model trains and repaired them for people from all across Utah.  Joel loved Big Band and Jazz music, and was known to play Frank Sinatra or Glenn Miller loud enough to be heard from outside the house from time to time.

Joel was a faithful member of the Church of Jesus Christ of Latter Day Saints and loved fulfilling his duties as a Building Scheduler for the Brookside 2nd Ward.

Funeral services will be held Wednesday, March 13th at 11:00 am at the LDS Church located at 952 West 1580 South in Payson, Utah.  There will be a viewing Tuesday, March 12th from 6:00 – 8:00 pm at the Brown Family Mortuary, 66 South 300 East in Santaquin, Utah, as well as one hour prior to the funeral at the church on Wednesday. Burial will follow at the Payson City Cemetery.

To order memorial trees or send flowers to the family in memory of Joel Thompson, please visit our flower store.