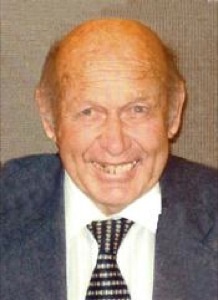 With thankful hearts we pay tribute to our wonderful father Joe Fowers, age 86, who passed away January 9, 2012 in Provo. He was born April 26, 1925 at his parent's home in Orem. He was the youngest of seven children born to John Baird and Elizabeth Bertha Sulser Fowers.

Joe was raised on a fruit farm in the middle of Orem where he learned to love farming with all of its joys and hardships. In 1943 he graduated from Lincoln High School. Later he met a wonderful and beautiful young lady, Delores Robbins. They were married in the Salt Lake Temple December 1, 1948 by Elder Ezra Taft Benson. They were blessed with a son, Lynn, and later a daughter, Kellie.

Joe loved his mother-in-law, Thelma Robbins, and treated her like his own mother. After her husband Luzell passed away in 1956, he helped her with pruning, irrigating, spraying and harvesting her fruit. Joe worked hard in his own orchards to provide for his family raising both sweet and sour cherries, peaches, pears and apples along with raspberries that were of the highest quality. He was also a bus driver for 14 years in the Alpine School District.

Joe and Delores enjoyed traveling throughout the United States and Canada visiting Arabian and Belgian horse farms and attending horse shows. Our dad was happy and very friendly with a quick smile and a twinkle in his eye that would light up your heart and he had many friends. He very much enjoyed serving as a ward clerk to seven bishops along with all of the other callings he received. Joe loved his family and was always happiest when he was spending time with them.

He is survived by his children, Lynn (Sherryl) Fowers, Genola, and Kellie (Glade) Robbins, Santaquin. Also 10 grandchildren, 11 great grandchildren with two more arriving soon. He was preceded in death by his wife, parents and all of his siblings.

Family and friends are invited to gather Sunday, Jan. 15th from 6 to 8 pm at the Brown Family Mortuary, 66 South 300 East, Santaquin. Funeral services will be Monday at 11:00 am at the Santaquin Stake Center, 45 South 500 West, with a viewing from 9:45 to 10:45 am prior to services. Interment will be in the Santaquin City Cemetery.

To order memorial trees or send flowers to the family in memory of Joseph Fowers, please visit our flower store.