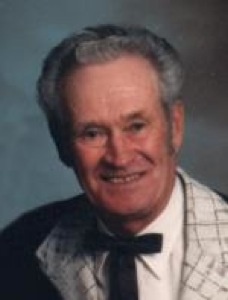 To listen to a recording of the funeral service click here:

Joseph L. Jones, 86, returned to his Heavenly Father on August 27, 2010. Joe passed away peacefully at his home in Lofgreen, Utah with his family by his side after a long and courageous battle with Alzheimer's disease.

Joe was born June 9, 1924 in Pleasant Grove, Utah to Lawrence and Essie Jones. He grew up with his family in Lofgreen and received his education in the Lofgreen and Vernon schools. He married Dele Ruth Jones July 15, 1947 in Salt Lake City and they just celebrated 63 years of marriage. Together they had 5 children; Larry Jones, Lofgreen, Kathy (Dave) McOmie, Grantsville, Jeff Jones, Lofgreen, Sandra (Bill) Hansen, Eureka, and Steven who preceded him in death at an early age.

Joe dedicated his entire life to the love of his family, friends and country. He started his career early in life working for Herman Lofgreen and then went to work for Union Pacific Railroad. From 1943 to 1946 he served our country during WWII in the U.S. Army, landing on Omaha Beach with the 29th Division and was stationed in France and Germany. After returning from war, he worked for a short time in the mines around Eureka before returning to work for the Railroad. Joe retired from Kennecott Copper Corporation in 1981 after 30 years of service.

Joe lived life to its fullest and enjoyed everything it had to offer including horseback riding, camping and fishing, playing pool, working on his tractors and especially spending time with his family and friends and helping others.

Joe is survived by his wife, children, 11 grandchildren and 18 great grandchildren; 3 sisters, Juanita Tallant, Beverly (Carl) Paul, and Loraine (Ren) Holman; 6 brothers, Buster, Aralda, Vincent, Dale (Tamara), Gene (Wanda) and Lynn (Emmie); and several nieces and nephews. He was preceded in death by his parents, a brother Bobby, and his son Steven.

The family would like to extend a special thanks to Grant and Sheila Childs, Dan Lee, Hospice Health Care and Tooele and Juab County Ambulance crews and all who stopped by to say hello during his illness.

Funeral services will be held Wednesday, September 1st at 11:00 am at the Vernon LDS Ward. Friends may call at the Holladay-Brown Funeral Home, 66 South 300 East, Santaquin Tuesday 6 to 8 pm and Wednesday at the Vernon Church from 9:45 to 10:45 am. Interment, Vernon Cemetery.

To order memorial trees or send flowers to the family in memory of Joseph Jones, please visit our flower store.