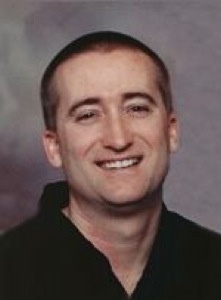 Joshua “E” Nelson, loving husband, father and beloved son passed away peacefully at age 35 on May 30, 2007 after a difficult battle with cancer. Joshua was born September 15, 1971 to Don Ray and Sharon Nelson, of Genola, Utah. Joshua attended Payson High School, graduating with honors, and served a mission for the LDS church in Houston, Texas.
He married his sweetheart and soul mate Zelma Gean Callaway in the Manti temple on June 23, 1995 and they were blessed with 4 beautiful children. He attended UVSC and became a registered nurse working at UVRMC for the past 11 years. He worked in oncology, IMC and the cardiac cath lab. He was known for his expertise and compassion and was respected and loved by those with whom he worked and served. He was active in the LDS church, serving in many callings including gospel doctrine teacher, counselor in the Young Men’s presidency, and most recently 2nd counselor in his ward bishopric.
He was known for his great sense of humor and loved a good practical joke. He was very active and enjoyed basketball, snowboarding, camping , hunting, and four wheeling with his family. He loved playing with his children, and often included the neighborhood in their games. He enjoyed serving with the young men in his ward, and was a profound influence in their lives. He also enjoyed canyoneering, motorcycling, and paint balling with his “work family,” and received great love and support from them during his illness.
Joshua was part of a large, close knit family who enjoyed regular reunions, family home evenings and service that united their family in love and harmony- a bond that will not be broken by his passing. His beloved wife was his constant, kind and loving caregiver through every challenge he faced. Her love and commitment sustained him and their children through his illness, and will continue to do so as he has been called home. We extend our love and appreciation to all who have given both temporal and spiritual support to Joshua and his family during this refining challenge in our lives.
Joshua is survived by his wife, Zelma, and their children, Shalee, Hunter, Shelby and Kylie, all of Santaquin, his parents, Ray and Sharon Nelson, Genola; grandparents, Max and Melba Nelson, Genola, Beverly S. Mortensen, Ephraim; father and mother-in-law, Paul and Joyce Callaway, Payson; brothers and sisters, Quinn (Sophia) Nelson, Price, Jeanice (Kelly) Woodbury, Spanish Fork, Amy (David) Wright, Matthew (Cathy) Nelson, both of Payson, Ben (Hannah) Nelson, Nathan (Jessica) Nelson, Adam Nelson, all of Provo, Elder Spencer Nelson, serving an LDS mission in Riverside, California; and many nieces and nephews. He was preceded in death by his grandfather, Ernell Keith Mortensen.
Funeral services will be held Saturday, June 2nd at 11:00 a.m. in the Santaquin North Stake Center, 600 North 200 East. Friends may call at the Holladay-Brown Funeral Home, 66 South 300 East, Santaquin, on Friday from 6 to 8 p.m. and Saturday at the church from 9:30 to 10:45 a.m. prior to services. Burial, Santaquin Cemetery.
Condolences may be sent to the family at holladaybrown.com
To order memorial trees or send flowers to the family in memory of Joshua Nelson, please visit our flower store.