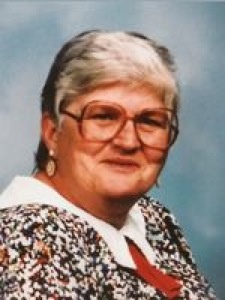 Rowena Joyce Burgess, 69, of Santaquin, Utah and formerly of Grants Pass, Oregon, died Saturday, May 27th in Santaquin.
Joyce was born September 16, 1936, in Opp, Alabama, to George and Edna Sasser Grimes.
On June 4, 1955, in Cantonment, Florida, she married Joseph Burgess who preceded her in death in March of this year. After Joe’s retirement from the Navy and then Bechtel Engineering, where they lived in Saudi Arabia for 10 years, she became active locally in many things, including the Ladies Auxiliary of the Fleet Reserve Association where she served in many roles.
Joyce and her husband lived in Grants Pass before moving to Santaquin in December.
She was a member of Calvary Crossroads Church. She served as regional president of the Northwest Ladies Auxiliary Fleet Association (PRPNWLAFRA). She enjoyed watching baseball (go Dodgers), scrap booking and all kinds of crafts, travel, and reading.
She is survived by a son, Joseph Burgess Jr. of Grants Pass, Oregon; three daughters, Kathryn Reinsch of Scranton, Kansas., Marguerite Deason of Ogden, and Dianne Hinton of Santaquin; a brother, Wayne Grimes of Bainbridge, Georgia and a sister, Bonita Norman of Birmingham, Alabama; 11 grandchildren and four great-grandchildren.
Funeral services will be held Friday, June 2, 2006 at 11:00 a.m. at Calvary Crossroads Church in Grants Pass, with Bob Bonner officiating. Special memorial recognition by the Ladies Auxiliary of the Fleet Reserve Association. She will be interred with her husband at Eagle Point National Cemetery.
Chapel of the Valley Funeral Home, Grants Pass, Oregon, is in charge of arrangements. Visit the online remembrance registry at www.chapelofthevalleyfuneralhome.com.
Contributions may be made to Calvary Crossroads Church, 1051 S.E. M St., Grants Pass, OR 97526.
To order memorial trees or send flowers to the family in memory of Joyce Burgess, please visit our flower store.