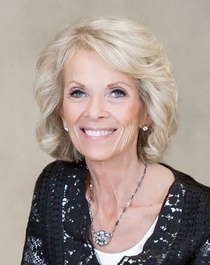 Karma passed away peacefully in her Farmington home surrounded by her loving family on Wednesday, January 18, 2017.  She was the fifth of six children born June 30, 1949 to Howard and Jean Crowther Ivory in the small town of Roosevelt, Utah.

At age four, Karma and her family moved to Springville, Utah where she was raised and made many fond memories with her siblings, family and cherished friends.  During that time, Karma met the man of her dreams, J. Craig Karren and courted him while he served as a full time missionary for the Church of Jesus Christ of Latter-day Saints. Karma graduated from Springville High School in 1967 and was awarded the Sterling Scholar in Business Award.  After graduating from high school, Karma’s father was assigned to work for the US Government in India.  Karma and her younger sister, Kathy, moved overseas with their parents.  While in India, Karma spent her time working for the US Embassy.  Soon after moving back to the US, Craig returned from his mission and the two love birds were married on June 4, 1970 in the Salt Lake LDS Temple.

Karma was an exceptional wife, mother, grandmother, sister, aunt, and especially friend. Everyone who knew Karma felt like they were her best friend.  Karma lived life to the fullest and was able to check off her never ending bucket list that included so many family and friends in her quests.

Thank you to all those at Quality Home Health & Hospice Services and the Utah Cancer Specialists for the never ending love and devotion that was shown to our sweet wife, mother and grandmother.  Our hearts are full for the exceptional care of the loving staff at Brown Family Mortuary.

Please click here to view the video tribute
To order memorial trees or send flowers to the family in memory of Karma Karren, please visit our flower store.