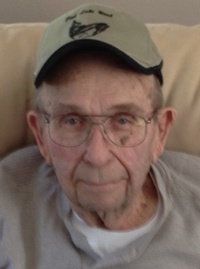 Kay worked as a brick layer at Geneva Steel for 40 years. He also helped lay brick on many of the LDS churches around the state, helped build Camp Koholowo in Santaquin canyon, as well as building his own home. He played baseball and later was active in little league for many years.

Kay was a member of the Santaquin Fire Department for over 50 years. He loved hunting, fishing, trapshooting and golf.  He and Holly traveled to Europe, Russia, Mexico, the Caribbean and most of the United States.

Funeral services will be held Wednesday, September 25th at 11:00 am at the Santaquin Stake Center, 45 South 500 West.  Friends may call at the Brown Family Mortuary, 66 South 300 East, Santaquin on Tuesday from 6 to 8 pm and Wednesday at the church from 9:45 to 10:45 am prior to services. Interment, Goshen City Cemetery.

Listen to a recording of the service below:

To order memorial trees or send flowers to the family in memory of Kay Peterson, please visit our flower store.