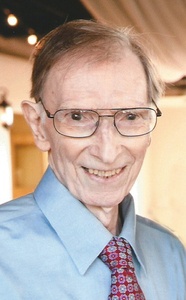 Kay Eugene Privett, 88, passed away Saturday, November 30, 2013 in American Fork. Born September 12, 1925 in Blackfoot, Idaho to Floyd Elmer and Emma Hunter Privett. He attended schools in American Fork and played football and basketball for American Fork High School. He served in the US Navy during World War II as a Signalman on a LST ship.

Kay married Norma Dawn Laursen June 14, 1947. They were sealed in the Salt Lake LDS Temple December 8, 1978.  He was an active member of the LDS Church serving in many callings.  He worked for Chipman’s Lumber and Alpine School District. He loved watching BYU football and basketball. He was a True Blue fan.

He will be greatly missed by his children, Michael Privett (Stacey), Kathleen Fox (Rick), Marcia Ruth Konold (Mike); his sister, Beverly Fowler (Steve); eleven grandchildren, fourteen great-grandchildren, and two great-great grandchildren. He was preceded in death by his wife Norma, his parents, and his little brother Donny.

As a family we would like to thank everyone at Hearts for Hospice for the wonderful care they gave to our Dad.

To order memorial trees or send flowers to the family in memory of Kay Privett, please visit our flower store.