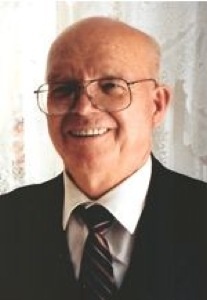 Kenneth Gaylen Thomas, age 80, passed away February 17, 2007 at his home in Payson, Utah. He was born November 19, 1926 in Genola, Utah to David Bynon and Grace Hartvigsen Thomas. He married Deleen Isaacson November 29, 1952 in Genola and they were later sealed in the Manti LDS Temple. Deleen died Sept. 1, 2000. Kenneth married Colleen Schwab November 9, 2002 in the Provo LDS Temple. Kenneth was a Veteran of WWII, serving in the US Army. He worked as a miner and later as an electrician at Geneva Steel for 25 years. He loved fishing, traveling and playing Skipbo and chess with his family. He had a pilot's license and especially loved to fly. He was a faithful member of the LDS church, serving in many callings. He was a temple worker and enjoyed extraction work. He had served a mission with his wife in Eureka, Utah and served in the Special Needs Primary in Payson. He is survived by his wife, Colleen, of Payson, children, LuAnn (Blaine) Wride, Benjamin, Kay Isaac (Mona) Thomas, Provo, Warren Dee (Beverly) Thomas, Genola, Shelly Thomas, Magna; step-children, Becky Daniels, Taylorsville, Robert E. Walker, Payson; 16 grandchildren, 9 great grandchildren; 2 sisters, Wanda Kelly, American Fork, Peggy Hunt, Taylorsville; 4 brothers, Bynon Thomas, Salt Lake, Lynn Thomas, Vernal, Douglas Thomas, Genola, and Darwin Thomas, Spanish Fork. He was preceded in death by his first wife, Deleen, 2 brothers and 2 sisters. Funeral services will be Wednesday, Feb. 21st at 11:00 a.m. in the Genola 2nd Ward, Main & Center St. Friends may call at the Holladay-Brown Funeral Home, 66 South 300 East, Santaquin Tuesday 6 to 8 p.m. and Wednesday at the church from 9:45 to 10:45 a.m. prior to services. Burial, Goshen Cemetery with military honors.

To order memorial trees or send flowers to the family in memory of Kenneth Thomas, please visit our flower store.