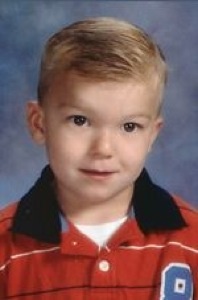 Korbin (Korby) Ryder Horton peacefully returned to his Heavenly Father on Friday, August 10, 2007, the result of an ATV accident. Korbin was born April 29, 2002 to Bryan and Naomi Horton and a room full of loving aunts. Korbin was a sweet boy who always wanted to help, especially his big brother Colton, whom he worshipped. Korbin was blessed with a younger sister, Katelyn, that he loved to tease and trick into doing things for him. But everyone else better watch out if they thought they could get away with picking on his little sister. There was nothing he liked more then being outdoors, especially fishing with his dad. When all the other kids got bored, Korbin was there waiting for a bite--just in case he needed to jump in and wrestle it. Korbin was loved by all and he had an extra soft spot for "nammas" and "pappas." He is survived by his parents, Bryan and Naomi Horton, brother, Colton, and sister, Katelyn; grandparents, Bruce and Marge Houser, of Santaquin, Keith and Jeany Richards, of Goshen, and Ken and Carol McGee of Monroe, Utah; and many other great-grandparents, aunts, uncles, cousins and many friends. Korbin is preceded in death by a grandfather, Allen Horton, and many other great-grandparents. Korbin was one-in-a-million and will be missed by all who knew him. Funeral services will be held Monday, August 13th at 11:00 a.m. at the Old Santaquin Stake Center, 90 South 200 East. A viewing will be held Sunday, August 12th at the Holladay-Brown Funeral Home, 66 South 300 East, Santaquin from 6 to 8 p.m. and Monday at the church from 9:45 to 10:45 a.m. prior to services. Burial will be in the Santaquin Cemetery.

To order memorial trees or send flowers to the family in memory of Korbin Horton, please visit our flower store.