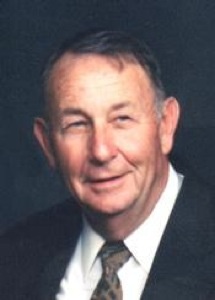 LaRain A Goodall, 85, passed away April 23, 2013 in Santaquin from the cruel claws of Alzheimers. He was born November 24, 1927 in Santaquin, the son of Parley M. and Laura Jerman Goodall. He married Zaloma Leavitt December 20, 1954 in Logan and they were sealed in the Manti LDS Temple February 29, 1964.

LaRain served in the US Navy during the Korean War. He graduated from Utah State University and worked as a Civil Engineer with the US Bureau of Reclamation. He co-designed the Jordanelle Dam, Pineview Dam, Wanship Dam and Willard Bay Project. He served on the CUP Credit Union Board for several years. He spent many hours irrigating any and every thing, chasing weeds and trying to get everyone else to participate. He built his family a log cabin of which he was so willing to share. He was active in the LDS church having served as Ward Clerk in two bishoprics.

The family would like to give special thanks to Chelsea Draney and Encompass Hospice for their compassionate care during his passing.

Funeral services will be Monday, April 29th at 11:00 am at the Santaquin Stake Center, 45 South 500 West. Friends may call at the Brown Family Mortuary, 66 South 300 East, Santaquin, Sunday 6 to 8 pm and Monday at the church from 9:45 to 10:45 am prior to services. Interment, Santaquin Cemetery with Military Rites by Santaquin American Legion, Post 84.

To order memorial trees or send flowers to the family in memory of LaRain Goodall, please visit our flower store.