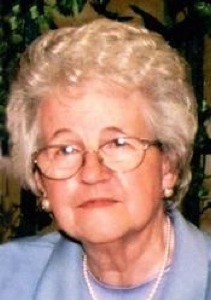 LaWela Kay Steele, 81 of Santaquin, peacefully passed away January 2, 2013 after a courageous battle with COPD. With her daughter, Linda, at her side our Heavenly Father welcomed our sweet and loving mom back home with so many loved ones that she missed so dearly.

LaWela was born March 30, 1931 in Goshen, Utah to Ray and Blanche Lewis Kay. She was the first of three children to fulfill her parent's dreams of becoming parents. In later years, two brothers joined this family, Dan and Delreese, of whom she thought the world of.

She attended school in Goshen and Payson, graduating in May of 1949. The following December 30, 1949 she married her sweetheart, Mac Arthur Steele. He preceded her in death in 1995.

LaWela and Mac were the proud parents of five children; Alan (Caralee), Linda (Lonnie) Martinez, Jeff (Paige), Delray, and Jason (Arlana), all of Santaquin. Also, grandparents to 14 and great grandparents to 24 with one on the way. LaWela's most cherished accomplishment was raising her children a�" they were her whole world a�" she was always so concerned for their happiness.

She was a member of the LDS church. When her children were young she taught Primary and Cub Scouts. She was also a proud member of the DUP. LaWela enjoyed being with her family. These last few years her illness has given us the privilege of spending time caring for her. We Love You, Mom! A special thanks to all our hospice and home-health care help.

Funeral services will be held Tuesday, Jan. 8th at 11:00 am at the LDS Chapel at 345 West 100 North. Family and friends may gather at the church on Monday from 6 to 8 pm and Tuesday one hour prior to services. Interment, Santaquin City Cemetery.

To order memorial trees or send flowers to the family in memory of LaWela Steele, please visit our flower store.