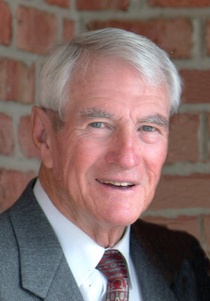 Lawrence Martin Brown rejoined his Father in Heaven on Sat. June 14, 2014 surrounded by the family he and Marilyn raised.  He passed peacefully at home of natural causes.

Larry was born Nov. 11, 1927, to Florence Powell Brown and Augustus Martin Brown, in Salt Lake' City, Utah. Larry had an adventurous drive to master anything he set out to do and make it fun. Pulling his loaded wagon, he delivered fresh vegetables to the neighbors when he was just a tyke. That was the beginning of his life as a salesman. Then came delivering office supplies on his bike to customers of Mid­ West Office Supply, where he became the top salesman. He purchased his own store, Skyline Office Supply. While he was a successful executive, before long he followed his love for selling and chose to become a salesman for leading furniture manufactures, traveling 9 states and part of Canada. If you needed a travel guide or where to find the best restaurant in town, he was your man. He loved fishing and hunting, but was happiest on his boat with his family. He Joined the Navy and served his country in the occupational forces in Okinawa. He graduated from the U of U with a business degree. He was a board member of the Salt Lake Jaycees and belonged to the Rotary Club. Larry made success seem easy and fun. He married his perfect love, and high school sweetheart, Marilyn Allred, on June 29, 1948 in the Salt Lake LDS Temple. They raised six adventurous children in their Murray home, amidst most of the animal kingdom.

The funeral will be at noon on Wed., June 18,  2014 at the Ridgecreek LDS Chapel, 5735 So. Fashion Blvd. in Murray, Utah. The funeral will be preceded by a viewing from 10:30 to 11:45 am at the church.
The family would like to thank the many thoughtful friends and neighbors who have lovingly supported Larry and Marilyn in recent years. You are truly Angels on Earth. We are beholden to the Rldgecreek Ward Relief Society and the Mark Brown Family Mortuary for their great service. We also want to thank our blessed nightingales, Kati, Mica, and Deanne.

In lieu of flowers the family suggests donations to the LDS Perpetual Education Fund at http.//www.ldsphilanthropies.org. Thank You.  Share condolences and memories at www.brownfamilymortuary.com.

To order memorial trees or send flowers to the family in memory of Lawrence Brown, please visit our flower store.