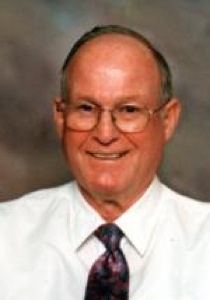 Lawrence Berry "Jiggs" Ewell passed away at Mountain View Hospital Saturday, April 24, 2010 at the age of 80.

He was born December 8, 1929 in Pleasant View (Provo), Utah to Arthur E. and Robera Jolley Ewell. As a child the family moved to Santaquin where Jiggs spent his early years attending school, participating in sports and singing in various plays and choruses and causing mischief whenever opportunity presented itself. He loved music and was a gifted singer, sharing his talent in many settings throughout the majority of his life. He went on to excel in sports at Payson High where he continued to be involved in civic affairs.

He married Clarice Greenhalgh and together they had three sons, Curtis (Cordie), Larry (Jill) both deceased and Randy (Marilyn) Petersen. They were later divorced.

Jiggs loved his country and served during the Korean conflict spending much of his service with troops in Germany. After returning from the service he met and fell in love with Janet A. Steele. Love blossomed and they were married on November 19, 1954. Their union was made eternal in the Manti Temple on June 25, 1963. They are the proud and loving parents of Bruce (Sandy), Jeff (deceased) and Leesa, Laura (Monte), and Ron (Mary). Their children, 24 grandchildren and 30+ great grandchildren will be forever blessed because of his fierce love of family and the countless hours spent providing for and loving all of them.

Jiggs was blessed with many talents and will be forever remembered for his ability to make most any food look lovely and taste wonderful. He provided thousands of meals in hundreds of venues and found great joy in doing it.

He served four years on the Payson City Council with specific responsibilities for the Water/Sewer departments. He was involved in the planning and construction of the waste water treatment plant that now serves Payson.

Jiggs served faithfully in the LDS Church, working in two bishoprics and various Stake and auxiliary callings. After retirement he and Janet completed a full time mission in Birmingham England from February 1992 through August of 1993.

He is survived by his Eternal Sweetheart Janet; children, Curtis (Cordie), Randy (Marilyn), Bruce (Sandy), Laura (Monte) and Ron (Mary); brothers, Bob (May) and Kent (Liz); and a host of loving grandchildren, great grandchildren and others. He was preceded in death by his parents Art and Robera, brothers Whimp and Frip; sister Arlene; sons Larry and Jeffrey and a daughter-in-law Jill.

Family and friends are invited to a viewing to be held Wednesday, April 28th from 6 to 8 pm at the Holladay-Brown Funeral Home, 66 South 300 East in Santaquin. Services will be held Thursday, April 29th at 11:00 am at the Mountain View Stake Center, 75 South 600 East in Payson with a viewing prior to services from 10:00 to 10:45 am. Interment will be in the Payson City Cemetery with full military rites by American Legion Post 48.

A special thanks to the doctors, nurses and others who served Jiggs during his difficult times.

2 Timothy 4:7 "I have fought a good fight, I have finished my course, I have kept the faith"

To order memorial trees or send flowers to the family in memory of Lawrence Ewell, please visit our flower store.