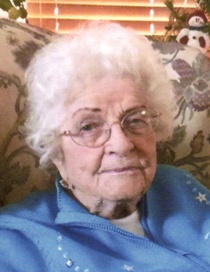 Lela Carter Bultez, age 92, passed away peacefully December 30, 2016 at her daughter's home in Santaquin, Utah.  She was born July 8, 1924 in Lehi, Utah to Thomas Leon and Alice Holdsworth Carter.  She married George Louis Bultez October 13, 1940 in Reno, Nevada.  Their marriage was later solemnized in the Logan, Utah LDS Temple.  George passed away November 29, 1999.

Lela was an active member of the Church of Jesus Christ of Latter-day Saints.  She served in the Los Angeles, San Diego and Seattle LDS Temples.

Funeral services will be held Monday, January 2, 2017 at 11:00 am at the Brown Family Mortuary, 66 South 300 East, Santaquin, Utah where family will greet friends one hour prior to services.  The interment will be in the Laurel Cemetery in Murrieta, California at a later date.

To order memorial trees or send flowers to the family in memory of Lela Bultez, please visit our flower store.