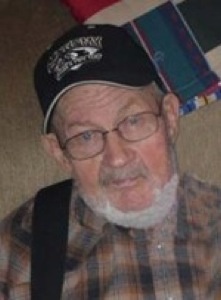 Leon Alfred Johnson, age 82, of Mona, passed away April 2, 2009. He was born August 21, 1926 in Pleasant Grove to Alfred W. and Mabel Kirk Johnson. He married Charlotte Eden July 8, 2006 in Spring Lake. Leon attended school in Pleasant Grove before joining the U.S. Navy. He served as a Pipefitter in the Navy during WWII, Korean and Vietnam Wars before retiring after many years of service. He then worked for Geneva Steel and later at Ascent Country Residential Facility where he taught several young men to weld. He enjoyed his time there so much and was able to leave his worldly body there. Leon is survived by his wife, Charlotte; two brothers, Kenneth Kirk Johnson, of Tooele, and Merlyn W. Johnson (Bonnie), of Coalville; and many nieces and nephews. Leon did not have children of his own but he was a wonderful Dad to Daniel Nelson and Celeste Eden, and a great companion to Squeaker. He was preceded in death by two brothers, LeRoy and Clyde Wilford Johnson. Funeral services will be held Wednesday, April 8th at 2:00 pm at the Holladay-Brown Funeral Home, 66 South 300 East, Santaquin, where family and friends may gather one hour prior to services. Burial will be in the Pleasant Grove Cemetery.

To order memorial trees or send flowers to the family in memory of Leon Johnson, please visit our flower store.