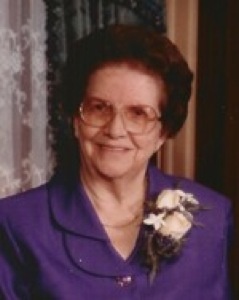 Our loving mother, grandmother, sister and friend, Leona Green Franks, of Eureka, passed away suddenly December 6, 2008 at the Orchard Park Care Center in Orem, Utah. She was born March 4, 1924 in Meadowbrook, Alberta, Canada to Leo and Maud Eveline Wiley Green. After the passing of her mother, when Leona was 3 years old, her family moved to Silver City, Utah where her father met and married Leona's step-mother, Edythe. Leona attended school in Eureka and graduated from Tintic High School in 1943. She married Darrell LaVern Franks November 16, 1947 in Eureka where they made their home. They had two children, Barry and Eileen. Leona was employed at the local variety and drug stores in Eureka and later was a long time employee of First Security Bank where she was a manager for 30 years before retiring in 1999. She was a kind and generous person who was loved and respected throughout the community of Eureka. She was involved in many community organizations and an active supporter of all three church denominations and the schools in Eureka. She was a lifetime member of the Tintic Lady of Elks in which she held various offices and also the Eureka Senior Citizens where she was elected "Senior Citizen of the Year". She enjoyed playing bridge, bowling, camping, shopping, taking trips to Wendover with her sister and brother-in-law, gardening and yard work, but above all spending time with her family, especially her grandchildren and great grandchildren. Leona touched the lives of many with her generosity, smile, kind words of encouragement and her strength. She is survived by her daughter, Eileen (Ray) Schow, Eurkea; daughter-in-law, Mary Franks, Salt Lake City; four grandchildren, Melanie Evans (Joe McMahon), Traci (Brandon) Snell, Kristin (Jeremy) Coe, Erica (Adam) Garbinski; six great grandchildren, Stephanie Evans, Shyenne McMahon, Logan Snell, Cooper Snell, Parker Coe, Morgan Coe; sister, Grace (Joe) Bernini; and sister-in-law, Donna Laird. She was preceded in death by her husband, Darrell, son, Barry, brother, Robert, brothers-in-law, Lauren Franks and Dick Laird, grandson-in-law, Tony Evans, mother and father-in-law, LaVern and Anna Franks, and her parents. The family would like to give special thanks for the kind and loving care shown to Leona during her stay at Orchard Park Care Center. Funeral services will be held Saturday, December 13th at 11:00 am at the Eureka Elks Lodge. Friends may call at the Holladay-Brown Funeral Home, 66 South 300 East, Santaquin, Friday 6 to 8 pm and Saturday at the Elks Lodge from 9:30 to 10:45 am. Burial, Payson City Cemetery.

To order memorial trees or send flowers to the family in memory of Leona Franks, please visit our flower store.