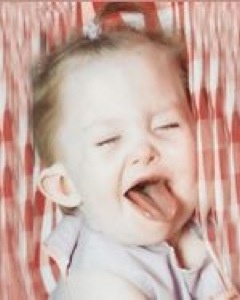 Lily Rose Irene Meidinger, age 6 1/2, passed away July 2, 2007 in Payson, Utah. She was born January 30, 2001 in Provo, Utah. She was one of Heavenly Father's precious angels. She had Trisomy 17q. Everyone who came in contact with her loved her. Her hero was Grandpa Greg and Uncle Thomas. She was our precious angel and we love her and will miss her dearly. She is survived by her parents, Joshua (Angela) Meidinger, of Spanish Fork, Rebecca White and Russel Christensen of Santaquin; her older and brave sister, Taylor Meidinger, her step sister Angel, and her step brothers, Ryan, Karben, Hunter and a half brother on the way; her grandparents, Greg and Mary White, Santaquin, Pete and Janis Koense, Payson, Dwayne and Shawna Meidinger, Goshen. She was preceded in death by several great grandparents, an aunt, and several grandparents. Funeral services will be held Thursday, July 5th at 11:00 a.m. in the Santaquin 12th Ward, 90 South 200 East, where friends and family will gather from 9 to 10:45 a.m. prior to services. Burial will be in the Goshen Cemetery under the direction of Holladay-Brown Funeral Home, Santaquin.

To order memorial trees or send flowers to the family in memory of Lily Meidinger, please visit our flower store.