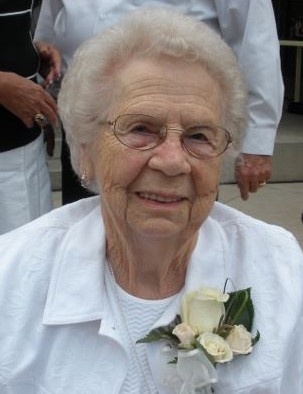 Lois Clark Johnson, 101, passed away Thursday, May 20, 2021 in Santaquin, Utah. Lois, an identical twin to her sister, Lola, was born October 20, 1919 in Lehi, Utah to James Lynn Clark and Effie Melissa Schow. Soon after her birth her family moved to Logan, Utah where she attended elementary school.  While in the fourth grade the family moved to Provo, Utah and there she attended, Timpanogos Elementary School, Dixon Junior High, and graduated from Provo High School.  She married George Edwin Johnson August 19, 1940 in Provo, Utah. They became the proud parents of six children, four daughters and two sons.  Lois and George were fruit growers.  She enjoyed working alongside her husband. Family life was tied to the land.  Hard work, simple fun, love and religion were fundamental values they taught their children.  After the children were raised Lois and George bought a travel trailer and enjoyed many camping trips with friends.

Lois was an amazing cook, canned much of their food, and made many beautiful quilts.  In her later years she crocheted hundreds of lap blankets, baby afghans, hats, and scarves that became treasures to family members as well as many being donated to charities. Lois was a member of the Church of Jesus Christ of Latter- day Saints and was constantly helping those in need.

To order memorial trees or send flowers to the family in memory of Lois Johnson, please visit our flower store.