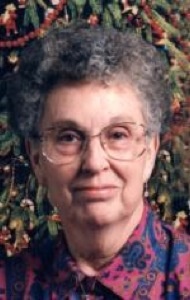 Lucille May Robinson Christensen died November 13, 2010 in Riverton, Utah. She was born in Eureka, Utah November 5, 1926 to Dewey and Delores Knotts Robinson. She grew up in Eureka and was married in her parents home on December 24, 1945 to Earl Vaundel Christensen. The marriage was solemnized in the Salt Lake Temple in June, 1965. Vaundel died August 25, 1999.

Funeral Services will be held Thursday, Nov. 18th at 11:00 at the Elberta, Utah LDS Chapel, 15331 S 12800 West, where family and friends may call prior to the services from 10:00 to 10:45. Interment, Goshen City Cemetery under the direction of Holladay-Brown Funeral Home, Santaquin.

To order memorial trees or send flowers to the family in memory of Lucille Christensen, please visit our flower store.