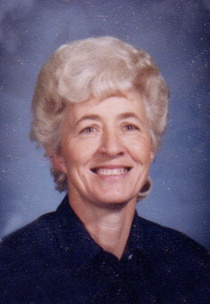 Ludene "Stewart" Fields, 83 years of age, passed away at home in Goshen, Utah on Wednesday September 14, 2016.

Ludene was born September 11, 1933 to the late Morris Bartholomew and Edna “Wright” Stewart. She was the second of 10 children and grew up in Genola, Utah.

Ludene married Harry William Dean Jr. “Bill” November 27, 1950 and three children were born from this union; Carla, Laray and last but not least Julie Dean, whom she joins in heaven. They later divorced and she married Carl Edward "Ed" Fields October 12, 1985 and was blessed to spend the remainder of her life with Ed by her side and caring for her.

Ludene worked for Steele and Laura McIntyre until 1963 when she began working for Tintic School District where she remained employed until her retirement in 1995.

Ludene “Grammy” had an outgoing, fun-loving personality and was never too busy to lend a helping hand to anyone. She was always thinking of others first. She was a loving and caring person, devoted wife, mother, grandmother and friend.

To order memorial trees or send flowers to the family in memory of Ludene Fields, please visit our flower store.