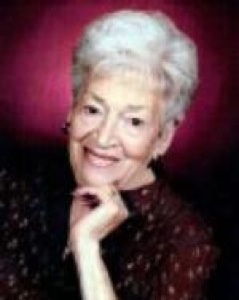 Margaret Ekker Fennell is preceded in death by her husband of 58 years, Martin J. Fennell. She is survived by her Children JoRae (Terry, deceased) Kay, Eileen (Craig) Lindsay, Martin Fennell, Jr. (Deon), 11 grandchildren and 19 great-grandchildren and brother, Jack (Ann) Ekker. Margaret met her Lord and Savior Sunday, July 18, 2010. She was born in Mammoth, UT on April 29, 1920 to Albert and Naomi Whitlock Ekker and was a life-long resident of Eureka, UT, until the last seven years when she lived in Bakersfield, CA with her daughter, Eileen and family. As a convert to the Catholic Church her faith was paramount in who she was and all she did. She was a member of St. Patrick's in Eureka, UT and of St. Philip the Apostle in Bakersfield, CA. Her family was the most important thing in her life. The door to the Fennell Home was always open to clergy, friends and family who were greeted with love and a bountiful table. Her gifts extended to many leadership positions she held in church, civic and community affairs.

To order memorial trees or send flowers to the family in memory of Margaret Fennell, please visit our flower store.