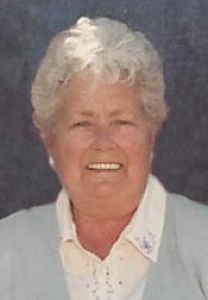 Margaret Ida Peterson Thomas of Genola, Utah went home to heaven November 7, 2012. Margaret was born August 16, 1934 in Santaquin, Utah to Mildred Ellen Menlove and Reed Ezekiel Peterson. During World War II her father moved the family to Salt Lake City where they lived in an apartment while he worked at the Remington Arms Plant and Ogden Ordinance Depot supporting the war effort. After the war the family was happy to move back to the farm in Santaquin where she loved helping in the truck garden and fruit orchards.

On July 21, 1951, Margaret married Byron Arthur Thomas of Genola and together built a home and raised five children. For Mom, family was everything. She loved being involved with all her children's activities. She coached Little League, taught Scouting and was Young Women's Camp Director. She loved the outdoors, camping and hunting trips and touring over all the continental U.S. by trailer and motorhome visiting family and old friends and making new ones.

Margaret was a member of the LDS Church where she served as a Primary worker for thirty years but her favorite calling was in the Genealogy and Family History Centers in the Santaquin and Goshen Stakes. Her life work has been researching and documenting the personal and family histories of the Thomas and Peterson families.

Survivors include her sisters, Colleen Horrocks of Bountiful, Kathleen Searle of West Valley City; her brother, Reed Edward Peterson of Orem; her children, Sandra (Brent) Penrod of Genola, Steven Thomas of Spring Creek, Nevada, Virginia (Gery) Schneider of Butte, Montana, Ren (Hilda) Thomas of Nephi, and Tracy (John) Cowley of Saratoga Springs. Margaret has 11 grandchildren and 22 great grandchildren. She was preceded in death by her husband, Byron and a grandson, Brennan Haskell.

To order memorial trees or send flowers to the family in memory of Margaret Thomas, please visit our flower store.