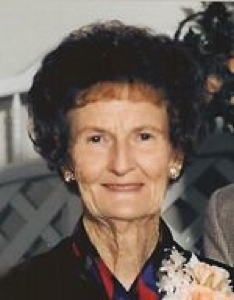 Marjorie Gardner Trotter, 85, passed away May 23, 2007 at the Heritage Park Care Center in Roy, Utah of causes incident to age. Marge was born April 5, 1922 in Goshen, Utah, the daughter of Walter and Gracie Steele Gardner. Her mother died when Marge was three years old after which her father's sister, Mary Price, helped raise her in Goshen. Marge worked for the war effort in California in 1944. Later, while raising her family, she used her skill as a seamstress at the sewing plant in Nephi, Utah. Marge married Stanley Howard Trotter, also from Goshen, October 9, 1945 in Amarillo, Texas. Marge and Stan raised three children, Diana, Howard, and Scott. They enjoyed a loving home and learned the value of work from their parents. Her life was spent in the care of her extended family and friends. Her compassion was shown in caring for friends and family at their life's end. Marge prepared lovely, wonderful meals for others and will be missed greatly. She expressed her love for her grandchildren and great grandchildren by spending a lot of time with each one. Her home and yard were her pride and joy. Pride of a job well done in all she attempted was her trademark. All who knew her admired her self-sufficient lifestyle. She cared for others first never thinking of herself. Marge is survived by her husband, Stan, a daughter, Diana (Bob) Wolfe, Durango, Colorado, two sons, Howard (Glenna), Sunset, Utah, and Scott (Cindy), Goshen; 12 grandchildren and 25 great grandchildren. A brother, LaMont Gardner, preceded her in death. Family will greet friends at the Holladay-Brown Funeral Home, 66 South 300 East, Santaquin, Utah on Friday, May 25th from 11:00-12:30 followed by a short graveside service at her request in the Goshen Cemetery at 1:00.

To order memorial trees or send flowers to the family in memory of Marjorie Trotter, please visit our flower store.