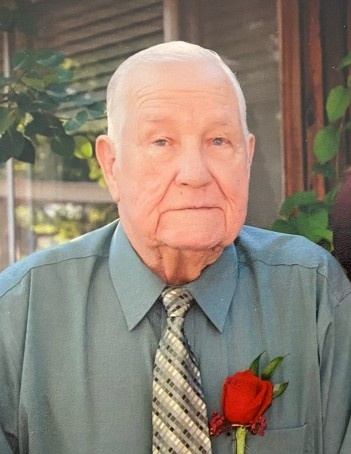 Mark Ray Williams was born on November 15, 1932 in Santaquin, Utah to Samuel Earl Williams and Hazel Adelene Greenhalgh. He attended school in Santaquin and Payson where he played baseball and was the captain of the football team. After high school he served in the Korean Conﬂict and was honorably discharged at the rank of sergeant ﬁrst class.

Mark worked at Geneva Steel for 37 years as a boiler maker, where he made lifelong friends who continued to meet weekly for breakfast up until his death.

Kathleen and Mark split time between Santaquin and Mesquite where he loved a good game of blackjack.

He always coached his boys in baseball and taught many young men the skills of baseball. He was a volunteer ﬁreﬁghter for Santaquin City for many years. He was an avid outdoorsman who loved to hunt, ﬁsh and ride his four wheeler. He loved a good western movie and never met a Johny Cash song he didn’t like. His greatest joy was watching his grandkids grow up and succeed in the journey of life.

He was preceded in death by his parents, sister Linda, brother Bob and wife Charlotte. Mother and father in law Fred and Lucille Ore and his two best friends Howard Armstrong and Lamar Frost.

He is survived by his wife of 64 years Kathleen Williams, their children Curtis & Rose Williams, Brian & Kelly Stevenson, Morgan & Keri Williams, as well as their 12 grandchildren and 23 great grandchildren.

The family would like to express their gratitude for all the kind acts of service that have been shown by our friends and neighbors. It has truly made this diﬃcult time easier for us.

Funeral services will be held Thursday February 4th at 11:00 am at the Santaquin North LDS Stake Center, 545 North 200 East. There will be a viewing for family and friends Wednesday from 6:00 to 8:00 pm at the Brown Family Mortuary, 66 South 300 East, Santaquin and Thursday at the church from 10:00 - 10:30 am prior to services. Interment Santaquin City Cemetery with military honors by Santaquin American Legion, Post 84. Those attending are asked to please follow all mask and social distancing guidelines. The service will be live streamed for those not able to attend. Follow the link below to view the services.

To order memorial trees or send flowers to the family in memory of Mark Williams, please visit our flower store.