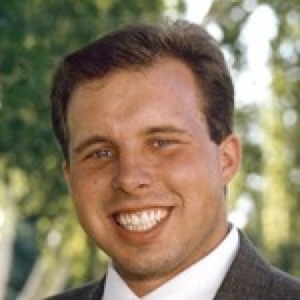 Matthew Neil Budge, age 36, passed away Wednesday evening, September 24, 2008 at his home in Lehi, Utah, after a seven month battle with Neuroendocrine Carcinoma. He was born February 29, 1972, in Provo, Utah and graduated from Clovis High, Clovis, California in 1990 and then earned a degree in Zoology at BYU. After working 8 years for Eli Lilly he returned to BYU to earn an MBA degree. He served 2 years in the LDS Belgium, Antwerp mission. In 2007, he left a position with Price-Waterhouse-Cooper in New York, New York, to work for Texas Utilities in Dallas, Texas. He leaves behind his wife of 12 years, Crystal Chapin Budge & six beautiful children; Nathanael, Sariah, Rebekah, Rachel, Hannah, & Caleb. Matt was preceded in death by his grandparents, Taft & Jean Budge of Paris, Idaho and is survived by his grandparents, Byron & Darlene Jensen of Orem; parents, Neil & Jan Budge of Lehi, Siblings: Phil (Sally) Budge of Nashville, Tennessee; Liz (Jason) Raff of Eagle Mountain, Utah; Janeil (Marc) Wardell of Sanford, No. Carolina; Lauren (Bryan) Fowler of Herriman, Utah; and Ryan (Christianne) Budge of Clovis, California; and a whole passel of aunts, uncles, cousins, nieces & nephews. Matt had a beautiful voice and always had a warm smile. He was a voracious reader, loved fishing, and enjoyed a good board or card game. He loved serving in the LDS church in any position to which he was called; he was a trusted servant of the Lord. He had no guile and never held a grudge. He loved his in-laws as much as his own family. Most of all, he was a devoted husband and loving father. His life was filled with gratitude which he continued to express to the very end. He will be sorely missed. Funeral services will be held at 10:00 am, Monday, September 29, 2008 at the Lehi 34th Ward building at 1631 East 900 North in Lehi, with viewings at the church on Sunday evening from 6:00-8:00 pm and Monday morning from 8:30-9:30 am. Interment will be at the Lehi City Cemetery. Funeral services will be conducted by Holladay-Brown Funeral Home, Santaquin, Utah. "In lieu" contributions to the children's college funds or online condolences can be shared with the family at http://matthewbudge.blogspot.com.

To order memorial trees or send flowers to the family in memory of Matthew Budge, please visit our flower store.