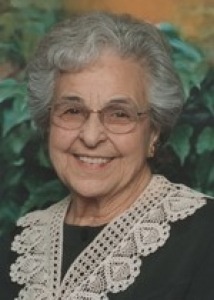 To listen to the recording of the service click here:

Maureen Christiansen Cheever, born Dec. 18, 1923 passed away peacefully on Mar. 22, 2010 after a mercifully short bout with lung cancer. Hers was a life devoted to the needs and well being of not only her family but to everyone she knew. Quilting was a life long passion; along with embroidery, knitting, sewing and other well honed skills. Now and for years to come countless people are still being warmed by her handiwork. She was the epitome of a devoted wife and caring mother. She relished the opportunity for compassionate church service and as a result served many years in the Relief Society. She also served as a Gospel Doctrine Sunday School teacher and also enjoyed years of service in the Primary working with the children.

She was born and grew up in Santaquin, UT attending school there until she moved on to Payson High School. There she met the love of her life, Byron Cheever, and she waited patiently while he served a two-year mission for the LDS Church in Ontario Canada. Upon his return they were married and sealed for all eternity in the Manti Temple on February 17, 1944. Unfortunately he was soon thereafter drafted because of World War II so she again patiently awaited his return and spent the time at home with her parents. Their first son Douglas was born while his Dad was off to war.

After his return they lived in Payson for a few years where two daughters, Kathy and Barbara were born. Soon after that a job advancement necessitated a move to Heber City where their final son and daughter, David and Dianne, were born. They settled in and spent over twenty-five years there while raising their family. In 1975 another job advancement required a move to Spanish Fork allowing them to be closer to their aging parents. As the years passed they were called to served a Church History mission in the Chicago IL area. Upon their return a smaller home seemed in order and so they purchased a condo in Payson. It was here that she was preceded in death by her husband Byron Cheever and where she lived until her health no longer permitted it.

As a last stop before moving on to her reward she lived at South Towne Ranch in Sandy where she again made many friends. She would want to thank the staff and residents there for all of their support and kindness. We also express appreciation to the staff of First Choice Home Health and Hospice and to Homewatch Caregivers who provided loving care during her final days. She was greatly loved and admired by all she met and stands as an excellent example for her posterity who remain.

She was preceded in death by her husband of 59 years, Byron Cheever, by her parents Lee and Pauline Christiansen of Santaquin, her only sister Mina Karen Taylor and by a great granddaughter. She is survived by her five children Douglas (Brenda) Cheever of Layton, Kathy Cheever of South Jordan, Barbara (Jason) Moulton of Seattle, WA, David (Susan) Cheever of Orem and Dianne (Gardell) Johnson of Tempe AZ. 22 grandchildren and 25 great grandchildren also survive her.

Funeral services will be held Monday Mar. 29th at 11:00 am at the Payson Mountain View 6th Ward at 681 East 500 North. A viewing will be held Sunday, Mar. 28th at the Holladay-Brown Funeral Home, 66 South 300 East, Santaquin from 6 to 8 pm and again on Monday, Mar. 29th at the church from 9:30 to 10:30 am. Interment will be in the Payson Cemetery next to her husband and granddaughter. Condolences and memories may be shared with the family at www.holladaybrown.com In lieu of flowers it is requested that you make a contribution to the LDS Church General Missionary Fund.

To order memorial trees or send flowers to the family in memory of Maureen Cheever, please visit our flower store.