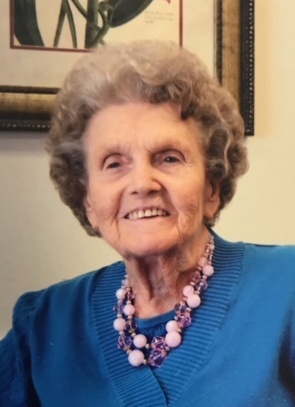 Our wonderful mother, Thelma Maureen Nelson Davis passed away April 26, 2018 in Salt Lake City, UT.  She was born May 27, 1927 in Genola, Utah to Radcliffe and Thelma Rosley Nelson.  She was the oldest of 10 children. She learned to work at an early age and continued to work and serve others throughout her life.  Recently, when her health declined she would say “the hardest work I’ve ever done was nothing.”  She attended school in Genola and Goshen and graduated from Payson High School. She married Carroll Hardy Davis, August 31, 1945 in the Salt Lake Temple. They made their home and raised their seven children in Genola, Utah. She was known far and wide for her homemade bread, sewing skills, beautiful flower gardens, and her service to all.  She lifted all who struggled in life.

She served faithfully in the LDS church in many church callings including teacher, Primary President, Young Women’s President, and Relief Society President. She and her husband served a mission to Phoenix, Arizona and served several years as service missionaries in Eureka, Utah.  Her faith and testimony of the Gospel of Jesus Christ as well as temple service is her legacy.

To order memorial trees or send flowers to the family in memory of Maureen Davis, please visit our flower store.