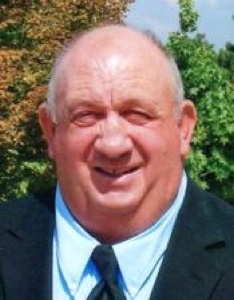 To listen to a recording of this service click here:

HE'S NOT REALLY GONE, HE'S JUST OUT RIDIN' FOR COWS

On August 16, 2011 Max Owen Horton packed up his saddle bags, saddled up his horse and went for one last ride out west after a long battle with Leukemia. He was born on the 28th of October in 1931 to Owen Wilkins and Rhea LaFern Croff Horton. He was born and raised in Goshen, Utah. On the 14th day of August 1952 Max lassoed himself up a little filly named Barbara Jean Beery and made her his wife. Their marriage was later solemnized in the Manti Temple on the 23rd day of March in the year 1953. They made their home in Goshen where they raised four children.

Max served his country in the army during the Korean war. He loved farming and horses. He was a gifted and extremely knowledgeable horseman and has broke and trained many horses from his early youth until his body wouldn't let him do it anymore. He loved his farm and riding the range for cattle. He spent many years working in the mines where he developed many friendships that endured throughout his life. When the mines closed he went to work as the custodian in Goshen Elementary School until he retired. Max loved the faculty and the kids at the school. It was his favorite job. Max served in many positions in the Church of Jesus Christ of Latter Day Saints. He served in the Bishopric, elders quorum, Sunday school board and as a high priest. He was a member of the Goshen Valley Riding Club for many years where he participated in many relay races and events bringing home many trophies and ribbons. He was a member of the Goshen Cattleman's association for many years. He served in the Goshen Volunteer Fire Department for many years. Most of all Max loved his family. He loved his children, Grandchildren, and Great-Grandchildren, and was fortunate to have them all live close by to celebrate their lives with them. He will be greatly missed.

Max is survived by his wife, Barbara. His four children, Debbie (Les) Eastwood, Dale (Peggy) Horton, Cindy (Scott) Trotter and Deanna Horton. He has seven grand children and nine great-grand children. He was preceeded in death by his parents.

The family would like to thank Alpine Home Health Care and Hospice. Kent, Clark, and Nathan, Joyce, Deena, and Melanie. Dr. Prcall and Dr. Frischknecht. His home teachers, Wayne and Bill.

To order memorial trees or send flowers to the family in memory of Max Horton, please visit our flower store.