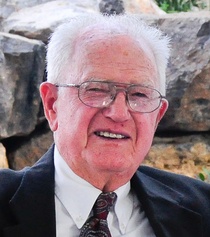 Max E Nelson was born 9 July 1920 in Salt Lake City, Utah to Ephraim Raymond and Harriet Blackham Nelson.  He passed away 19 October 2016 in Genola, Utah.  He had four brothers and two sisters; Radcliffe, McClain, Bernal, Eugene, Leone and Laurue.  He resided in Moroni, Utah and Genola, Utah, and attended schools in Goshen, Payson and BYU.  He served as a missionary in the North Central States Mission and later in the Army Air Force.  He later served a mission to Adam-ondi-Ahman, Missouri.

Max worked as a mechanic for US Steel and farmed.

Max loved the gospel of Jesus Christ, temple work, his family, and all the good people he worked with.  He enjoyed work, the outdoors, sports, music and singing, and Family History.  He was very involved in community service.

Funeral services will be held Wednesday Oct. 26th at 11:00 am at the Genola LDS Chapel, Center and Main.  A viewing will be held Tuesday Oct. 25th from 6:00-8:00 pm at Brown Family Mortuary, 66 South 300 East, Santaquin and again at the church on Wednesday from 9:45-10:45 am prior to services.  Interment, Genola Cemetery with military rites.

The family expresses sincere thanks to the staff of iCare and all those who provided care and support to the family.

In lieu of flowers, please consider donating to the LDS Humanitarian Fund.

To order memorial trees or send flowers to the family in memory of Max Nelson, please visit our flower store.