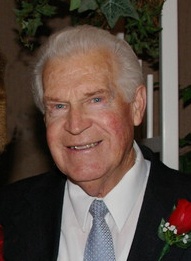 Merlin grew up on a farm in Pleasant View near where the Provo Temple and MTC are currently located. He had wonderful penmanship and won many awards for it. He attended BYU and played trumpet in the Cougar Marching Band. As a boy he raised pigeons. He was an avid hunter and fisherman. He served his country during the Koren war era helping the German reconstruction.

Merlin loved airplanes and engines. He managed and then owned a service station in Provo. He later worked as a delivery and salesman. He enjoyed being in the canyons. The outdoors brought him solace. Later in life he dabbled in painting. He loved people and life and will be remembered as a loving husband, father and grandfather.

Merlin was an active member of the Church of Jesus Christ of Latter-day Saints, serving as Bishop on the BYU campus, in several bishoprics, on the Stake High Council, YM President, High Priest Group Leader, Stake Mission President and numerous other callings. Mostly he loved serving in the temple.

He is survived by his children, Jeffrey Merlin (Darlene) Isaacson, Douglas John (Lani) Isaacson, William Scott (Annie) Isaacson, Sheri (Greg) Hills; 20 grandchildren and 30 great grandchildren; sisters, Carole May Cordner and Arline (LeRoy) Watkins. He was preceded in death by his wife, a brother, Leon and a grandson, Jeremy Isaacson.

To order memorial trees or send flowers to the family in memory of Merlin Isaacson, please visit our flower store.