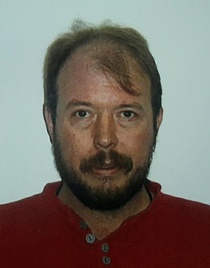 Mitchell (Mitch) Scott Johnson, 56, passed away in his daughter’s home in Payson, Utah January 21, 2017 surrounded by his family and loved ones.  He was born September 14, 1960 in Richfield, Utah to Robert Huge and Ada Claire Kotter Johnson.  Mitch married Sherry Anderson April 19, 1980 and they had two daughters.  They later divorced.

Mitch began working for the railroad as a train engineer at the age of 18 and retired at age 39 due to health issues.  He had a great sense of humor sharing endless laughs with friends, loved ones and even new acquaintances.

Mitch grew up in Salina, Utah and as an adult lived in Helper, Utah.  After retiring he moved to Utah County to be closer to his children and grandchildren.

He is survived by his two daughters, Brickell (Jeff) Tracy of Payson, Sheena (Casey) Perry of Spanish Fork, and four of his greatest blessings – his grandchildren, Colton, JT & Maddie Tracy and Avery Perry; his mother, Claire Johnson of Salina; and three siblings, Valerie (Jeff) Turek, St. George, Jeff Johnson, Pueblo, CO and Joe (Karen) Johnson, Lehi; seven nieces and nephews and many aunts, uncles, cousins and longtime friends.  He was preceded in death by his father, a nephew, Jordan Johnson and his beloved dog, Valerie.

Our family would like to express special thanks to the wonderful, kind and caring nurses at Encompass Hospice for taking such great care of our dad.  Not only did you take such great care he mostly enjoyed your friendship.  And to the Brown family, thank you for being such great friends to him.

Funeral services will be Saturday, Jan. 28th at 11:00 am at the Brown Family Mortuary, 66 South 300 East, Santaquin, where friends may call from 9:00 to 11:00 am prior to services.  Burial will be in the Payson City Cemetery

To order memorial trees or send flowers to the family in memory of Mitchell Johnson, please visit our flower store.