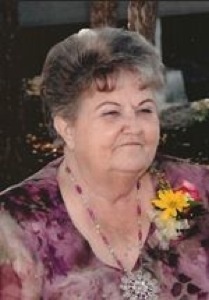 Myrna Throckmorton Steele, age 69, passed away November 23, 2006 in Provo, Utah. She was born December 20, 1936 in Genola, Utah to Sidney Daniel and Verda Ewell Throckmorton. She married Clifton Chester Steele October 30, 1958 and they were sealed in the Manti LDS Temple February 28, 1964. Clifton died February 14, 1987. Myrna worked as a secretary for the Tintic Division of Kennecott Copper and later at BYU. She was a member of the LDS Church. She loved traveling to sporting, agricultural and rodeo events with her family. Most important to her were her children, grandchildren, great grandchildren and her mother and she dedicated her life to serving them. She is survived by her children, Dale (Cindy) Steele, Genola, Sharla (Darol) Hawkins, Benjamin, Chris (Miriam) Steele, Genola; 7 grandchildren and 8 great grandchildren; her mother, Verda Throckmorton, Genola; sisters, Lucille (Douglas) Thomas, Genola, Lavina Throckmorton, Payson, and Twila (Clair) Hales, Layton. She was preceded in death by her father, Sidney Throckmorton, three brothers, Edward, Ronald and Arden, and her first husband, Carl York. Funeral services will be Monday, November 27th at 12:00 noon in the Genola 2nd Ward Chapel. Friends may call at Holladay-Brown Funeral Home, 66 South 300 East, Santaquin, Sunday 6 to 8 p.m. and Monday at the church from 10:30 to 11:45 a.m. prior to services. Burial, Santaquin Cemetery.

To order memorial trees or send flowers to the family in memory of Myrna Steele, please visit our flower store.