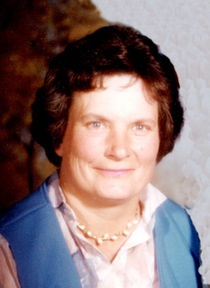 NolaRae Butler Olson passed away peacefully on July 8th, 2014 with loved ones at her side. NolaRae was born on a brisk fall day October 26th, 1930 to Noal and Ulala Butler. She was the first of four children including Dawna, Shirlene and Ronald Butler.

NolaRae grew up in Spring Lake where she loved to go down to the lake to go swimming in summer and ice skating in winter. She graduated from Payson High School and shortly after married her sweetheart, Jack Olson. NolaRae and Jack were married on July 21st, 1948 in the Manti Temple for time and eternity. They bought their first home in Santaquin, Utah in 1950 and lived there ever since.

NolaRae had many talents which were sewing, quilting and singing. She was a faithful member of the Church of Jesus Christ of Latter-day Saints and served in many callings throughout her life. Her greatest love in the church was family history work. Because of all the work she did, many must have been waiting to greet her and thank her. NolaRae was also a very hard worker. She worked alongside of her husband and sons in the greenhouses.

Funeral Services will be held at 11am Saturday, July 12, 2014 in the Santaquin Downtown LDS Chapel. Family and friends may call Friday evening from 6-8 pm and Saturday morning from 9:45-10:45 am at the church. Interment will be in the Santaquin Cemetery.

To order memorial trees or send flowers to the family in memory of NolaRae Olson, please visit our flower store.