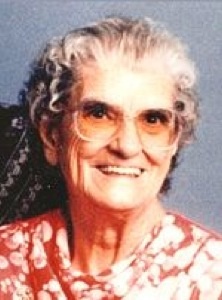 Rachel Baxter Long Hannifin, age 91, passed away peacefully at her home in Eureka, Utah on Friday, April 18, 2008. She was born January 7, 1917 in Goshen, Utah to John Grant Baxter and Sarah Florilla Burgess. Rose grew up in Goshen on the family farm. She attended school in Goshen and Payson. She married William Glen Long in August of 1935 and they were later sealed in the Manti LDS Temple. Glen passed away in March of 1965. She later married Edmund Patrick Hannifin in March of 1966. He passed away in October of 1985. She was a life-long member of the Church of Jesus Christ of Latter day Saints, serving in many callings. She also served a mission in Salt Lake City. She is survived by her children, Verl (Venna) Long, Joyce Peery, Jean (Glade) Jordan, Thelma (Loy) Thomas, Lola (Fred) Garbett, Victor's wife, Melba Long, Arthur (Retha) Long, Gail (Brent) Redmond, Evans (Theresa) Long and Rose Long. She is also survived by her sister, Lola Wilkinson, her brother, David Baxter, and by her numerous grandchildren, great grandchildren and great-great grandchildren. She was preceded in death by her parents, a daughter, Mary Frost Long, sons, Lynn and Victor Long, brothers, Evans, Victor and Bob, and sisters, Ruth, Mary, Agnes and Elizabeth. The family wishes to thank her wonderful neighbors and friends for their support and love. They would also like to thank the West Juab County Ambulance Association and the Juab County Sheriff's Office. As per Rose's wishes, a viewing will be held at the Holladay-Brown Funeral Home, 66 South 300 East, Santaquin on Wednesday, April 23rd from 10:00 to 11:00 a.m. Graveside services will follow at the Provo City Cemetery at approximately 11:30 a.m.

To order memorial trees or send flowers to the family in memory of Rachel Hannifin, please visit our flower store.