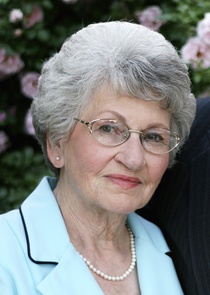 Now joyfully reunited with her parents and other loved ones, Ramona Mae Holmes Plato passed quietly through the veil Wednesday, December 21, 2016.

The youngest of four children, Ramona was the second daughter born to James Otto and Eva Mae Holmes, in Ransom, Kansas on January 15, 1930.  The Dust Bowl and Great Depression influenced the families’ move to the Deer Park Community north of Bonners Ferry, Idaho in 1935, where Ramona and her siblings grew up attending Copeland School and graduated from Bonners Ferry High School.

At the age of 18, Ramona married John Gale Plato on June 30, 1948 in Coeur d’Alene, Idaho.  The young couple settled in Bonners Ferry, ID to raise their family, became members of the Church of Jesus Christ of Latter-day Saints and were sealed in the Cardston, Alberta LDS Temple on June 20, 1964. They remained in Bonners Ferry until 1997, when the desire to be near their children and grandchildren led them to Santaquin, Utah.

Ramona’s love for community involvement aligned perfectly with her willingness to give of her time and talents. She served tirelessly in her church as the Relief Society President, in the community as member of the HEO (Help Each Other) Club and of many other community clubs, organizations, and service oriented groups.

Blessed with a tender heart that always had plenty of love to give, Ramona, known as Grandma to many, had a gift for attracting whomever or whatever needed nurturing which led to raising four loving Schnauzer children: Scooter, Tuffy, Heidi, and Murphy, who experienced no less care and devotion than her human children John, Wanda, Ferrill, and Jared.
Finally ready to slow down just a bit, Ramona and Gale moved into Seasons of Santaquin Assisted Living in February of this year, where they have enjoyed their own version of life’s perfect surroundings, beautiful scenery and dear friends.

In lieu of flowers, the family suggests contributions in Ramona’s memory be made to either the Boundary County Museum or Santaquin Senior Center.

To order memorial trees or send flowers to the family in memory of Ramona Plato, please visit our flower store.