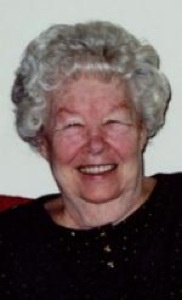 Mom grew up in the Santaquin/Genola area and later lived in Salt Lake City. She traveled to California where she worked in a defense factory during World War II. Her early marriage years were in Pampa, Texas. She and her family returned to Payson in 1951 where they raised their two sons. Mom remained in Payson, with the help of friends and neighbors, until 2009 when health circumstances forced her out of her home. She was cared for in St. George by her son, Rick and daughter-in-law Emmy, until her death. We will greatly miss her sunny disposition and unique laugh.

Visitation for family and friends will be May 7th at the Holladay-Brown Funeral Home, 66 South 300 East, Santaquin from 10:00 a.m. until 11:30 a.m. Graveside services and interment will be at Santaquin Cemetery at 12:00 noon.

To order memorial trees or send flowers to the family in memory of Relia Gilmore, please visit our flower store.