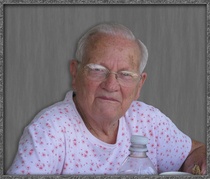 Lifelong Goshen resident, Vida Renee Johnson Miller, died March 15, 2016.  She was born September 10, 1930, descended from Tennessee mountain folk and a Mormon pioneer who came west with the first company. Raised by her widowed mother in a transplanted miner’s shack, she moved through the block to a house she built and shared with Howard, the man she married in 1948—those homes being the only two she ever lived in.

Renee hosted countless family gatherings, reunions, holidays, campouts, and picnics, and her passing leaves a hole no other potato salad can ever fill. Children, grandchildren, and great grandchildren seldom left her house without carrying away a quilt or afghan crafted by her always-busy hands. Throughout her life Renee served her family, community, and church as a little league baseball scorekeeper, Cub Scout leader, Primary president, rodeo secretary, room mother, Relief Society visiting teacher, temple worker, tractor driver, and keeper of branding fires. For many years, Renee worked as housekeeper and Executive Housekeeper at Mountain View Hospital in Payson.

To order memorial trees or send flowers to the family in memory of Renee Miller, please visit our flower store.