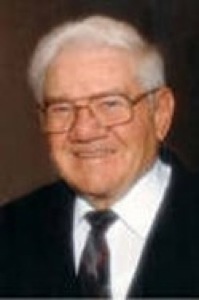 Richard Fielding Greenhalgh passed away peacefully August 3, 2008 . He was born December 27, 1924 in Santaquin , Utah to Albert A. and Nettie Chloe Tietjen Greenhalgh. He was the eighth of eleven children. He attended Santaquin grade school and junior high and graduated from Payson High School. He married his high school sweetheart, Carol Nuttall on May 8, 1950 . They were later sealed in the Manti Temple . Dick served in the Army Air Corps during World War II. When he returned home, he began working at Geneva Steel, continuing until retirement. He started his own construction business in 1952. He loved construction. He was very proud to own one of the first backhoes in Utah County . He held himself to high standards of quality and efficiency in his work. There are very few people in Santaquin that have not been touched by Dick's many acts of service He served on the Santaquin City Council. He held numerous positions in the LDS Church including financial clerk on the stake and ward levels, high priest group leader, Stake High Council and as a temple worker. He is survived by his sweet wife, Carol, daughter, Debby (Jerry) Nelson, Salt Lake City, sons, Rick, Santaquin, Brad (Lisa), Santaquin, Kirk (Stacy), Santaquin, stepson, Dave (Joyce) Lant, Spanish Fork, seventeen grandchildren, nine great grand children, one brother, Rex Greenhalgh, sisters, Helen Stott, Gaye Greenhalgh, Clarice (Burke) Peterson and Marilyn Clayson. Dick was preceded in death by sisters, Maxine Livingston, Genevieve Boyson, Lucille Liddle, brothers, Gene Greenhalgh and Blaine Greenhalgh. A viewing will be held Tuesday, August 5, 2008 from 6:00 p.m. to 8:00 p.m. at the Holladay-Brown Funeral Home, 66 South 300 East, Santaquin, Utah. The funeral will be Wednesday, August 6, 2008 at 11:00 a.m. at the Santaquin North Stake Center, 545 North 200 East with a viewing one hour prior to the funeral. Burial in Santaquin City Cemetery with military rites.

To order memorial trees or send flowers to the family in memory of Richard Greenhalgh, please visit our flower store.