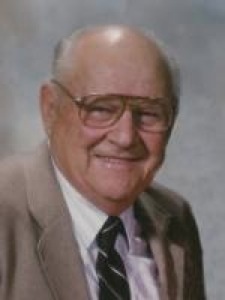 He was raised by William Jr. and Prudence Harriet Coombs Hudson along with his 9 brothers and sisters where they raised fruit, hunted East Mountain and formed their own baseball team. He married Lily Okelberry in the Manti Temple on July 18, 1945. They raised five children teaching them through their example of service.

Duke was one of the first coaches of Little League (Red Sox) in the area but his favorite coaching experiences were the all-star and American Legion. Many families were recipients of his garden produce. As a member of the LDS church he served in the bishopric, Elder's Quorum, and many other callings.

Duke was known for his baseball powerhouse. Batting left handed he could hit the ball to any field. He played for Santaquin and the Provo Timps in the Central Utah League, consistently batting above .500. His ultimate joy came later as he watched his children, grandchildren and great grandchildren follow in his footsteps a�" batting left handed and crushing the baseball or softball. Besides baseball Duke also loved to fish and hunt with his brothers and sons.

Duke worked for the Department of Transportation painting the highway lines all over the state of Utah. He was named the state employee of the year in 1983 and later retired after 42 years of service.

Thanks Grandpa for Sunday nights, 4th of July, Christmas parties and money games.

Duke is survived by children: Tom and Sue Hudson, Lynette and Eddie Neff, Bill and Kim Hudson, Trina and Ron Ellis, and Roger and Carol Hudson; sisters and sister-in-law: Sadie Jarvis, Mary Roberts, Kathleen Hudson; 16 grandchildren and 23 great grandchildren. He was preceded in death by his wife, a grandson and great granddaughter.

To order memorial trees or send flowers to the family in memory of Rodney Hudson, please visit our flower store.