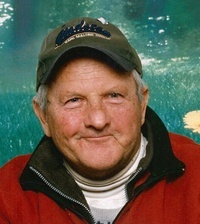 Ronald George Luker, 81, of Provo, Utah passed away on Wednesday, November 20, 2013 after a lengthy battle with congestive heart failure. He was born July 22, 1932 in Salt Lake City, Utah to George Caleb Luker and Avis Graff Luker. Ron was the oldest of their nine children. He was a great man who was loved by many, and he, in turn, loved others the best way he knew how. He seemed always to have a smile on his face, even in pain and suffering and continued to keep his sense of humor to the end.

Ron studied business at the University of Utah and he also enjoyed auditing classes at BYU, Provo, later in his life. He served an honorable LDS mission to the Eastern States from 1953-1956, which included an extension. He married Sharon Kay Watts, in the Salt Lake Temple on July 2, 1958 and together they had twelve children and 24 grandchildren. They were married for 29 years and although their marriage ended in 1988, their kindness to one another never ended.

Dad loved the outdoors. He spent many years working with wood; cutting firewood, cutting large slabs of wood for table tops and clocks and working as a “tree surgeon”. He enjoyed mining, and spent many years in this trade. He strongly believed in being prepared for whatever the future would bring.

Goodbye Dad, we love you, and will miss you, we appreciate the gift of life and the family you have given to us. Goodbye, Brother, we love and respect you, we appreciate your leadership, your kindness and the extensive Family History work you completed. Goodbye Friend, you gave of yourself, you were always appreciative and you were full of wisdom and knowledge and always willing to talk.

The family would like to thank Greg who selflessly cared for Dad, in his home, right until the very end and also all those from Sunrise Home, Health, & Hospice who helped care for Dad.

A memorial service will be held, Friday, December 6, from 11:00AM-1:00PM, at the Holladay Stake Center, on 4568 Holladay Blvd., Salt Lake City, UT.
To order memorial trees or send flowers to the family in memory of Ronald Luker, please visit our flower store.