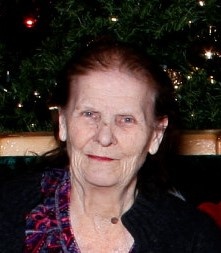 Ruby Raye Hagner (Tice) was born in Shallowater, Texas to Earnest Eugene Tice and Birdie Norine Fitzhugh on March 24, 1932. She passed away in Payson on November 15, 2018 at Country Lane assisted living.

Ruby grew up in Texas and moved to Wichita as a young woman. While in Wichita she worked at Boeing where she was known as “Ruby the Riveter.”  She raised 4 children with her husband Ernie. They moved and lived in several places due to Ernie’s changes in employment. They joined the Church of Jesus Christ of Latter-Day Saints in 1960 while living in Ark City, Kansas. Ruby and Ernie were sealed in the Salt Lake City Temple in 1971. They purchased their home in Libby, Montana where Ruby spent the next 40 plus years working and remodeling her home.

Ruby loved her home more than anything. She loved the gospel of Jesus Christ and would talk about it freely to others and give a copy of the Book of Mormon to anyone she could share it with. Ruby had a generous heart and would share what she had with those she saw in need.

To order memorial trees or send flowers to the family in memory of Ruby Hagner, please visit our flower store.