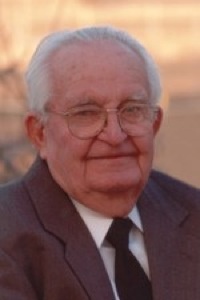 Our beloved husband, father, and grandfather, Seymour C. Isaacson "Swede", age 84 of Genola, passed away at his home surrounded by his family, Monday, July 20, 2009. He was born October 6, 1924 in Benjamin, Utah to Sam Isaacson and Edla Smith. Seymour married Janice Richins February 7, 1955. Their marriage was solemnized in the Provo Temple on September 25, 1988.

Seymour served as the Santaquin Senior Citizens director for 7 years. He was a high priest group leader and was an ordinance worker in the Provo Temple. Seymour loved farming and going with his family on trips to the canyon. He especially loved his family who where the most important thing in his life.

He is survived by his wife of 54 years; children: Gary (Janna), Dan (Periann), Jeanine (David) Bernal, Karen (Kerry) Houston, and Kim (John) Black; 24 grandchildren and 28 great-grandchildren. He was preceded in death by his sister, Jennie Sanderson.

Funeral services will be held Thursday, July 23, 2009 at 11 a.m. in the Genola LDS Church on the corner of Main & Center Street in Genola. There will be a viewing held Wednesday evening from 6:30 to 8 p.m. at Holladay-Brown Funeral Home, 66 South 300 East in Santaquin and Thursday at the church one hour prior to the services. Interment will be in the Santaquin City Cemetery.

To order memorial trees or send flowers to the family in memory of Seymour Isaacson, please visit our flower store.