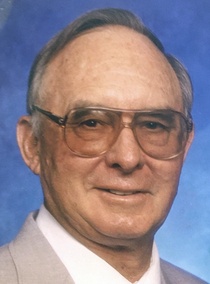 Sherman Lovell Jones of Santaquin, Utah passed away peacefully on Friday, November 11, 2016. He was born in Oak City, Utah on May 16, 1930 to Jefferson and Belva Jones. He was the sixth of seven children. He grew up on a farm near Delta, Utah and attended Brigham Young University where he met Merle Henderson of Provo, Utah. They were married September 13, 1950 and moved to Sutherland, Utah where their first four children were born. In 1958 they moved to Santaquin where they started a concrete business. Two more children followed. Sherman grew the business and specialized in concrete-lined irrigation canals and ditches. The business mainly did work in Millard and Utah counties but built ditches all over the state and in Nevada and New Mexico. As a family business, he taught his family the blessings of hard work.

Sherman was active in church and community service. He was the bishop of the Santaquin South Ward in the 1970s and served on the Santaquin city council and later as mayor in the 1980s.

The family would like to thank the staff of the Seasons of Santaquin care facility and CNS Hospice for their kind service in the last six months of Sherman’s life.

To order memorial trees or send flowers to the family in memory of Sherman Jones, please visit our flower store.