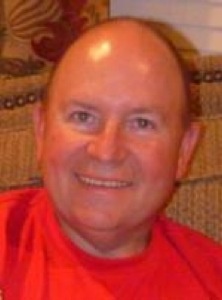 Our beloved Steven Merlin Russon, 53, lost his courageous battle with Lou Gehrig's disease on September 20, 2010 at home surrounded by loved ones.

Steve was born into a lovely home April 12, 1957. He spent his childhood years growing up in Lehi attending Sego Lily Elementary, Lehi Jr. High and Lehi High Schools. He served on the student council for both the High School and LDS Seminary. He served in the Georgia Atlanta mission from 1976 to 1978 for the Church of Jesus Christ of Latter Day Saints. As a High Priest his last calling in the church was the Ward Financial Clerk. He attended BYU for a time where he met the love of his life Mary Wilson. They were married August 22, 1981 in the Provo Temple. Soon after they were blessed with four beautiful children, Jenny (Stephen) Reding, Kari (Adam) Clements, Kim (Kai) Bagley, Kyle Russon. He is also survived by two grandchildren, Bentley and Halle Clements, his parents, Merlin & Sharlene Russon, a brother, Brad (Karen) Russon and a sister, Jeris (Scott) Scoffield.

Steve was always the life of the party. Not one person could be around him and not leave without their stomach hurting from laughing so much. Even in the hardest times of his disease he always had that sparkling personality. He was a sports fanatic and attended every BYU game he could. He spent his Saturday's on the golf course and even had a tournament named after him which will be repeated every year in his honor. He will be loved and missed by many.

Funeral services will be held Saturday, September 25th at 11:00 am at the American Fork 32nd Ward, 261 North 900 East. Family will greet friends at the church on Friday, September 24th from 6 to 8 pm and on Saturday from 9:30 to 10:45 am prior to services. Interment, Highland City Cemetery. Services under the direction of Holladay-Brown Funeral Home, Santaquin.

In lieu of flowers please feel free to donate to the Steve Russon Charity Account at any America First Credit Union.

To order memorial trees or send flowers to the family in memory of Steve Russon, please visit our flower store.