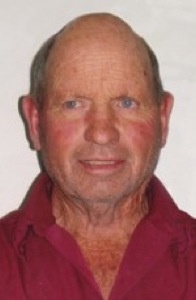 John Terrell Isaacson (Ike), age 76, died in an accident November 12, 2009 in Goshen, Utah. He was born August 7, 1933 in Genola to Leonard and Orthella Robbins Isaacson. He married LaDona Geneva Markham April 18, 1952. Terrell an active member of the Church of Jesus Christ of Latter Day Saints. He was a hard worker who loved his family. He worked as a farmer, steel worker and general handyman. At the time of his death, he was doing what he like doing most, which was staying busy and was working for Steve Ault. He was father to five kids: Terry B. (Sharon) Isaacson, Cordell (Barbara) Isaacson, Alan Roger (Karen) Isaacson, Brent Leon (Joyce) Isaacson, Wendy (Allan) Paulson; 22 grandkids and 16 great-grandkids. He was preceded in death by his parents, two grandsons and a granddaughter. There will be a viewing held Monday, November 16th from 6:00 to 8:00 p.m. at the Holladay-Brown Funeral Home, 66 South 300 East, Santaquin. Funeral services will be at the Genola LDS Church on Tuesday at 11:00 a.m. with a viewing there from 9:45 to 10:45 a.m. prior to the services. Interment will be at the Genola Cemetery.

To order memorial trees or send flowers to the family in memory of Terrell Isaacson, please visit our flower store.